For Miss-Fire member Christine, belonging to a women’s club is no new idea. She recently shared with us an article published in the Daily News on May 13th, 1990. Below is her story and the article. Enjoy a bit of NY motorbiking history! – The Miss-Fires

My name is Christine and I have ridden on motorcycle for as long as I remember. As a child, every time I would use the bathroom at my grandfather house, I would spend some time pretending to ride on the old broken motorcycle that my grandfather stored next to the toilet, which were in the shed next to the barn  (Yes!! This is true, my grand father had only running cold water in his house, and no indoor bathroom. This was the 60’s in rural France). As a teenager I loved going on ride on the back my cousins and neighbors bike. I also rode my father “Solex”, a cross between a moped and a bicycle, and my sister moped (in rural France in the 70’s, teenagers drove moped to get around, unlike in America, where they drove cars). By the time I got to college, I wanted to ride a real bike, so I used the money from my summer job to pay for motorcycle driving lessons and passed my motorcycle driving test the first time (the NYC motorcycle driving test is a joke, compared to the French motorcycle driving test). I dropped out of college in 1986 and  came to NYC on a one way ticket. As soon as I had enough money saved, I bought my first bike, a Yamaha 750 XJ. This was in 1987. One day, in 1989, I was in the Harley store in Long Island city, looking for riding apparel, when I saw an add on the bulletin board about a women motorcycle group: the American Women Road Rider Alliance. I was a member of AWRA from 1989 to 1991. The Long Island/NYC chapter was featured in a HSBC ad and was also interviewed by the Daily News. I recently found the old “hard copy” of the article while cleaning/disgarding some old boxes. So here it is. 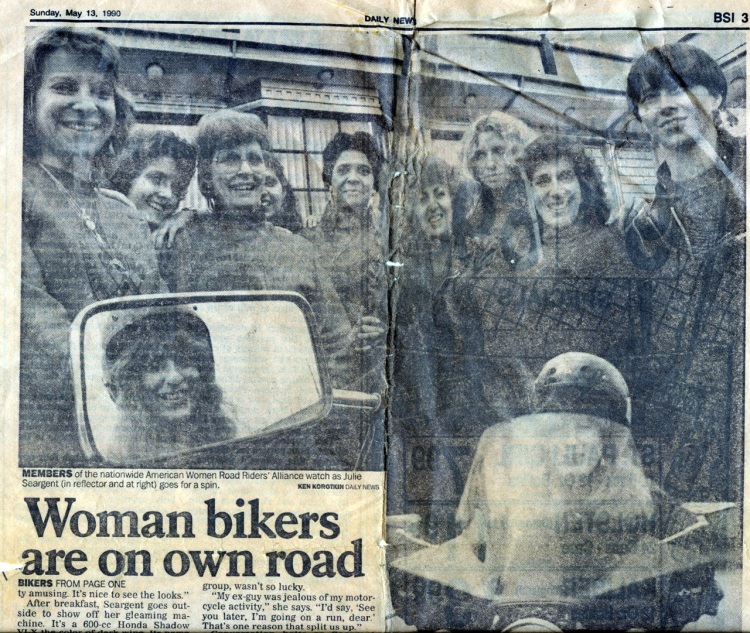 The Daily News, May 13th 1990: Miss-Fire Christine shown above, at far right.

My grand ma and grand pa were from Belfort, near Alsace, next to the the Swiss/German border. This picture was from the trip they took for their honeymoon, in the Alps. My grand ma told me that this picture was taken in Annecy. My grand pa was a blacksmith and bought his first bike in the late 1920’s. After WWII, he opened a garage, as horses were being replaced by cars.

One thought on “Women bikers are on a roll…and have been for a while!”