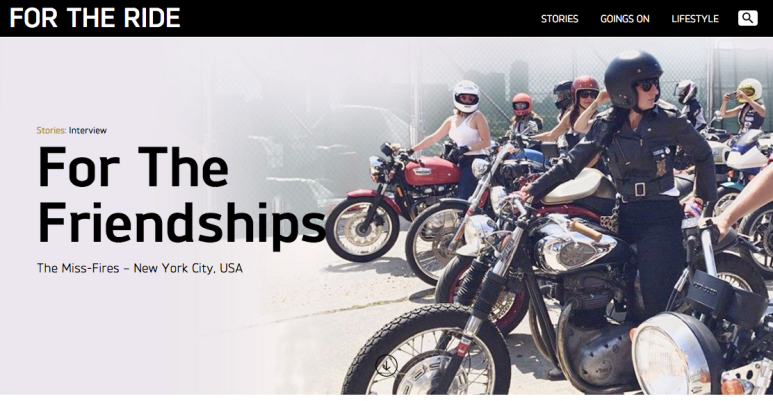 READ THE ORIGINAL STORY AT FOR THE RIDE

The Miss-Fires formed in October 2013 after a simple dinner ride made up of a few women. Being happy, active co-ed riders already they didn’t know where it would lead when they took that first scoot, but before dessert, they knew they were on to something.

Q. Why did you start the group in the first place?

A. Even though we were happy riding with the fellas, something unique and beautiful happens when you get just the girls together. Our group rides and wrenching nights at the garage quickly became a way for women both new and established in their riding careers to bond and encourage one another. The tight friendships and camaraderie that formed, based on nothing more really than a love of motorcycles, was the proof that we all needed the Miss-Fires.

Q. How many of you are there in the Miss-Fires?

A. More than 140 in seven cities across the United States and Canada, and growing every day. There is strength in numbers and reach around the world, and now the Miss-Fires acts as a support group for girls locally to gather and spend real time together, and globally as an extended family for advice, support and, yeah, travel opportunities!

Q. How did you decide on the name?

A. Everything we’re about is having fun, encouraging each other and never taking things too seriously. A misfire is a product of having an ignition system problem, bad timing, which results in your bike or car not starting well. The Miss-Fires is a twist on the idea that we’re all constantly learning, making mistakes and becoming better, stronger riders, wrenchers and people, while having fun doing it.

Q. Describe the kind of riding around Brooklyn.

A. Urban off-roading? NYC is treacherous on bikes, with rain, snow, alternate side parking, garages more expensive than suburban mortgage payments and potholes the size of SUVs. It’s challenging and wonderful because in part, you have to be a little nutty to ride here. Because of that, NYC riders are a wonderful breed of humans.

Q.Which bikes are the most popular in the group?

A. I personally ride a 1968 BSA 650 Lightning custom, but have always had vintage Triumphs in my 14 years, and I hope to soon have both a vintage and modern Bonnie. Past the Brit bikes like Thruxtons, we have a healthy number of Harleys, many modern and vintage Japanese models, and a few Italian ladies, dirt bikes, race bikes, and a sidecar rig thrown in.

Q. Do you have to be a woman to be in the Miss-Fires or are there honorary guys?

A. Though you do have to be a woman to join, we’re in no way sexist. We love riding with and supporting our male counterparts. The motorcycle community is our family and we’ve found that creating the women’s group that we needed has worked to strengthen, not separate, the co-ed community. There are actually two unofficial honorary male members who have earned our deep respect and support from the beginning – Tim and John, we love you!

Q. What’s been your best ride so far?

A. There are so many, and the answers would be different depending on which member you ask, but for me, our Halloween ride where we dressed as The Living Dead gang from the 1971 biker film classic Psychomania and rode around Brooklyn would be up there. Of course, I am the film nerd obsessed with all films vehicular, as can be seen in my long-running project Cine Meccanica (www.cinemeccanica.wordpress.com). Oh, and there are just a few Triumphs terrorizing the neighborhood in that classic British film by the way!

A. Any chance we get.