Or maybe I should title this “So you want to try off-roading?” I never have considered it much in the past, just looks like a bunch of frustration trying to go over boulders and getting stuck in the mud. Meh, not for me. I’ll stick to the pavement. But then a couple of years ago someone asked me to get in the van, as Corinna put it in a previous post.

“We’re signing up for American Supercamp, who wants in?” I looked it up online and, “I don’t know, that looks insane!”, I thought. I had heard of flat track racing, but never thought I would want to try it. But I did. I wanted to at least try it and if it wasn’t for me, then at least I could say I did something insane. So along with Beth, Val, Corinna, and Jason, we signed up and gave it a whirl.

It was my first time on a dirt bike ever, and I loved it. Of course, I was getting instruction from pros like Chris Carr, and a team of instructors who made it more about having fun than about drilling it into us. Well, they did drill it into us, but they never made us feel bad for falling over. The attitude was more like, “Well, now that you got that over with, you realize it’s not so bad to fall.” Which was true, other than a bruise. The fear was gone so it left room in my head to take more risks and really start sliding about in the dirt. I could see who fell and who hadn’t fallen yet, as in I was passing pre-fallen students. Until they fell… then it was game over and soon I was getting dirt flung back in my face. It was a dirty good time for my first introduction to dirt bikes.

I haven’t been on a dirt bike since. However, I have been looking at Jason’s dirt bike in a new light. He frequents trail rides with his friend Jay as often as he can escape the city. He leaves at the crack of dawn and comes back a couple of days later covered in dirt and grinning ear to ear. I finally tell him, “You know, I think I want to try that. I could try that at least once and if it’s not for me, then at least I could say I got some tires dirty.” Of course, I have absolutely zero experience trail riding and am not entertaining expectations of blipping over some logs with ease, but maybe I could try the bunny hill version of trail riding. I thought at first he would avoid the notion in order to have his alone time. But to my surprise, he found a dirt bike for me to “borrow”. 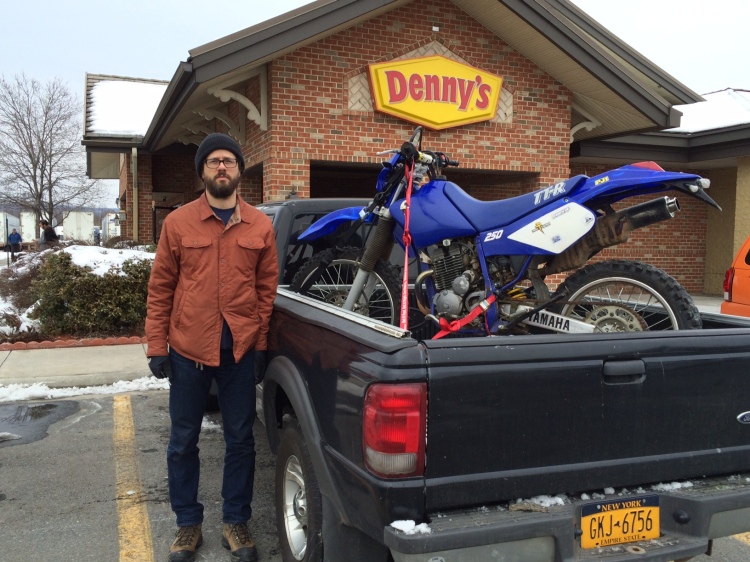 I was really excited when I saw that! It’s the larger version of the bikes we rode in American Supercamp. He told me about a NETRA event coming up in May in the Berkshires. There will be trails and dirt roads that he thinks I could handle, and some more advanced “hero” trails for those who are crazy in the head, which he will do. Sure! I’ll try that!

I finally got to play around with the Yamaha this past weekend. We have been watching a cabin upstate for some friends and thought it would be the perfect place to get my feet wet. There are plenty of dirt roads back there, as well as a few trails. So we unload his and hers dirtbikes… ha… and I go to get on, and realize… ummm. “I don’t know how to trail ride. Got any tips before I go bruise myself?”

“First thing… to get on, you put the kickstand up and turn the wheel away from you, so the seat comes down low enough so you can swing your leg over. Then straighten the wheel and there you have it.” So I do this, with a little difficulty. I don’t have proper dirt bike gear, since I’m only trying this out. I borrowed his AD1 pants for knee protection, but they are not gusseted and made it hard to ballerina onto the bike. But I managed to do it anyway. I notice I’m tippy toed, and I’m not a shorty at 5’8″ with a 32″ inseam. But that’s ok, the bike is light and I don’t feel any danger.

“When you go down a hill, put your butt farther back over the rear wheel, and maybe be up on your haunches like you’re riding a horse if the terrain is rougher. That way traction stays in the back and you can let the bike do what it needs to do without being jostled about. I see we’re at the top of Cardiac Hill, maybe I should ride yours down this one since it is more advanced. For now, just ride back and forth up here where it’s flat to get  a feel for the bike.”

Cardiac Hill was named by the owners of the cabin. It’s a steep hill with deep rain ruts that can swallow a tire. Walking up that hill with backpacks and gear make you feel like you’re going to have a heart attack. So I do as he says and go back and forth a few time. BORRRING!

“Hey, I want to try going down this hill. What’s the worst that could happen? I fall over and get a bruise?” He has me follow him, and I get on my haunches with my butt in back and the bike just goes right down. I got the rear tire into one of the ruts and the front tire to the side, and I think I’m going to eat dirt, but instead I released my tension and let it go do it’s thing. It was indeed like riding a horse and the bike galloped down the hill without throwing me. The rest of the roads back there are fairly easy with small hills and dips and turns. I can’t resist flat tracking it. Jason was riding pretty slow, I thought because he thought I would want to go slow. (He really just didn’t want to piss off the neighbors) So I pass him and slide in the turns and have a great old time.

When we returned to Cardiac Hill later that day, I remembered what he told me about going up steep hills. Thank God because I scared myself a little trying to chase him up that thing.

“When you go up a hill, or when you’re slowing down, it’s not like flat tracking. You put your weight forward over the handle bars to keep the front end down. If you have to, stand up on the pegs and keep the weight forward.”

So after passing him so rudely earlier, he came flying up from behind me and passed me on that hill. I had a streak of competitive attitude and followed him up. The bike was about to go out of control, so I stood up on the pegs and put my weight over the front end. It was rough, but I made it up that hill without bruises. I followed him into the woods where the trails narrowed a bit and there are uneven paths and brush. I was taking it with a lot less attitude. Mainly because I realized I have no skills going slowly over rocks and up steep angled hills. I kept stalling the bike and completely fizzled.

Jason was looking down at me through the brush waiting. Oh well… I got that far before my 43-yr-old thighs gave out. I came to realize 2 things. 1. I really enjoyed that. 2. I’ll need to do more squats.