Or maybe I should title this, “What not to do the first day you do an off-road event” or “What to do when you’re in over your head”. The phrases of this ride were still “I’ll try this“, but added to that were “I don’t know how” and “Oh shit“. I wasn’t sure what to expect on my first off-road event, which there is a correction from part 1. This event was sponsored by the Berkshire Trail Riders Association , not NETRA , but they tend to overlap in some ways. Anyhow, I was pretty psyched to try my first trail ride.

We loaded up the bikes into the truck and took off for Tolland, MA on Friday to settle in the night before the ride. There was an option to camp out on a farm, but someone in our group found us a nice cabin to rent. We sure were glad to have a cozy place to sleep that night because it rained cats and dogs all night and into the early morning. We were wondering what that much rain would do to the trails we were about to ride Saturday morning. Luckily the following day was crisp and clear with plenty of sunshine. 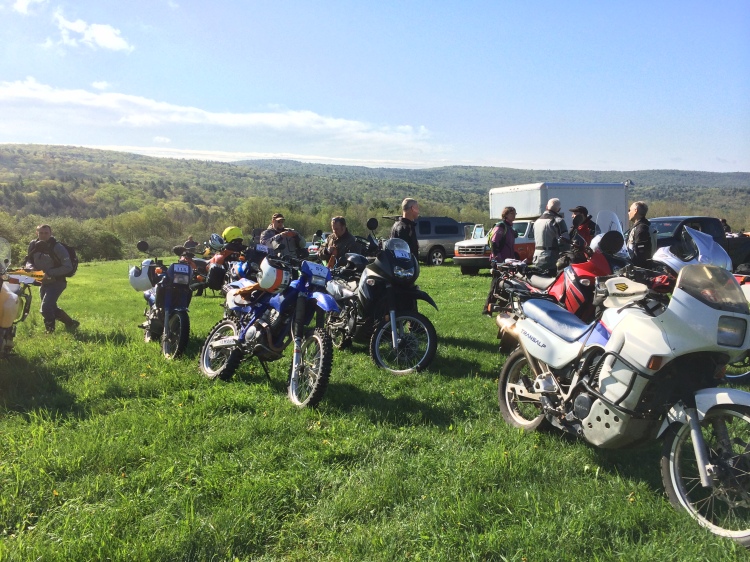 We headed where they would hold the rider’s meeting at 9:00 AM to go over rules and helpful information about the routes we were about to adventure onto. We were given route sheets with turn by turn instructions and descriptions of the terrain. Most roads were gravel and dirt and some pavement to get from section to section. Mixed in were “Hero Level” sections that if you had the know-how and the right bike, you could go be challenged. To give you and idea of what that is, here is the description they gave with the packet:

LEVEL 5: It doesn’t get any worse than this. Don’t go alone. NO BIG BIKES!

After going over the packet the night before, we decided who would ride what. Since I was the newbiest, I was to ride with our friend J. who said he’d like to take it easy and wouldn’t mind being my mentor. He had his Transalp with street tires, so he didn’t mind taking the easier roads. Peter also decided to ride with us, since he felt he didn’t have as much experience either. Don and Dan, who had dual sports with street tires, also ended up riding in our group of five. Jason and Adam decided they would try the “Hero-Level” sections of the route, so they teamed up together. As I looked around the riders at the meeting, I could kinda tell who would be the daredevils. Lots of knobby wheels and armor that resembled exo- skeletons.

There was a que to head out to the trails so we didn’t get all bunched up. Jason and Adam took off sooner while our merry band of five waited a while, since we knew we’d be slower. J. took the lead with me in tow and we headed out. Most of the roads were a lot like the dirt roads back by the cabin, and even easier. J. suggested that we start there and if I felt I could try something more challenging, then we could do that. I was having a blast, letting the tires slip about a bit. But we were told to not be jerks, since these were residential areas and trail rider associations are already on thin ice. So if there were mailboxes, keep it down, please. So not so much sliding about for me like I was back by the cabin, but I was still letting it slide a little bit.

I believe we came through a few level 1 sections, and then right before lunch, I met my first challenge. It wasn’t marked on the route sheet as a Hero Section for some reason, but J. and the guys think it seemed between a level 2 and 3. There was a mix of tennis ball and baby head sized rocks with water flowing through and some mud. I felt worried at first, but was glad to have knobbies and made it through to other side with some bumping and sliding. It even was fun after a few minutes once I figured out how to control the bike by getting off the seat and up on my pegs… like riding a horse. I was even given the glorious scene of men peeing into the ravine at the end of hero section. The surprise hero trail must’ve shook the piss out of them or something.

After a lunch break, we headed back to continue the route. J. stopped near a Hero Level 2.5 and asked me if I wanted to try that. It would have deep water and a rocky downhill. I was feeling uncertain about it, since the last hero section tired me out. I said, “I don’t know… I’m feeling intimidated.” J. walked over to the guys and asked something… I could see them shrugging. So he asked me again and I said, “Well, I guess I could take a look and see what happens.” We came up to the start of the section and there was a large puddle with a lot of mud. J. went right in and crossed at the side.. his feet up to the ankles in mud and his bike sputtering and churning to the other side. I’m muttering into my helmet, “Oh shit.” I look back at the guys and they are looking at me wide-eyed as if, “If she does it, we’ll do it.”

So I take my knobbied-self and get in the mud. What do you know… the bike could care less and made it over without dropping me into the puddle. Great! Let’s give this a whirl! Then I look back and Don is on his side against a rock with his bike pinning him down. “Oh shit!” We help him up and he’s ok. “Are you sure this is a level 2.5? Maybe we should turn back with these street-tired bikes.” But peer pressure ramps up and Dan says, “This isn’t enough to turn me back yet.” So off we go over some rocks like the previous hero I went over before lunch. Then we come up to rocky covered hill that runs upward. There are about three waist-high boulder/ledges with water running over them. I wish I had taken a picture, but I was too busy panicking.

“Oh shit! I don’t know how to do that!” J. says… “Just remember to keep your momentum going… don’t stop, just keep going!” Then he climbs right up those ledges with street tires. I look back… the same wide-eyed guys “If she does it, I’ll do it.” Oh man… I should’ve stopped there. Because I knew once I went up, I’d be like a cat stuck in a tree without knowing how to get down. But up I go…. and my bike stalls right before the rock ledges.

“I don’t know how to do this. I don’t think I can get up there.” J. comes back and say, “Come on, don’t wuss out on me now!”… “Oh shit. Ok… I don’t know what to do though, J.” So he tells me to follow his line… and he shows me by walking over the ledges… and also sliding on them since they are wet. “Ok, Erika… I did this with street tires, it’s not as bad as it looks. Now back up by Don and get your momentum going and follow that line.” So I back up, block the voice of reason out of my head… and I charge forward. I stand up on the pegs with my weight forward and up the bike goes! Right over all three ledges. Yahooo!! Then… Thud… whack. I hit a rut and fall over and smack my head on a rock. Luckily I wasn’t hurt… my back protection I just bought recently and my helmet did their job. But I was feeling pissed off.

Why in the hell did I fall for peer pressure? Whey didn’t I follow my instincts and turn back? This is just stupid! Then the guys come up and say… “You did it girl! And you looked good doing it!” Well… heh heh… ok then.. I guess I did do that insane climb. So I continue on, mostly because I don’t know how to get back down. But we come across a very large puddle, bigger than the first one. Some guys from different group come up behind us and we let them go through… and they plow through… get stuck… sputter in knee deep water… and with difficulty manage to get to the other side.

J. says, “Ok Erika, you go first.” This time I say, “No way! I’m not doing that! I don’t know how.” So J. gets on my bike… gets stuck, but managed to get it through… you know… with knobbies and all. I find out later he also took it through a second water crossing up ahead. The guys then proceed to get stuck one by one with street tires, but with help get through.

At this point, only J’s bike is on the other side and as he contemplates that, Adam appears. Now I know for sure that I’m in over my head if he’s showing up. Not that my inner voice wasn’t screaming at me the whole time, “You big dumb dumb!” Anyhow, I wait to see what strategy he will take, and he goes straight through the middle. I think this area would probably not have been so bad, but since there was so much rain it was worse than usual. Adam get stuck in the mud right in middle. The bike sputters and dies, flooded.

At this point, I start to wonder where Jason is. “Hey, where’s Jason?”. “He’s right behind me, maybe he stalled or something.” That isn’t too far-fetched. He had a kick starter, so he may be wrestling with that on a hill. I don’t think too much about it until another 15 minutes go by. “Maybe we should look for him.” But right at that moment he comes up over the hill. We show him where not to cross, now that we watched so many get stuck in there earlier. He looks at me with surprise probably thinking, “What the heck is she doing here?” He crosses and sits down by a tree. “I think I sprained something, I stalled on that ledge and came down on my foot. I’m going to make like Rip Van Winkle under this tree for  little bit.”

Long story short, the guys take some straps Jason had on him and pull Adam backward out of the mud. He managed to get it started, but goes back the way he came while J. followed behind him to make sure he got back alright. I tried to get through the rest of the Hero section, fell over again, and became completely defeated. Jason rode it down most of the way and walked back up for his bike, which I feel bad about now that I know his foot is broken. Peter rode it another section to help out. Once we got to a section that resembled the first Hero section, I took it the rest of way through that.

Lessons, I learned so many lessons. Peer pressure… at my age. I am amazed that still works on me, but now I know it does. Mind over matter… keeping my mind on the task at hand worked wonders. Being defeated… don’t be too hard on myself and just take away what I learned from it. Will I do Hero Sections again? Probably not in the near future. Will I give up on riding dirt bikes? Not likely, I had too much fun at times to drop it completely. But I won’t soon forget how unpredictable things can end up.